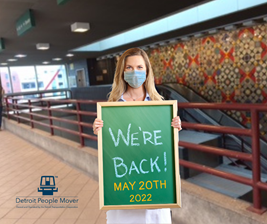 The 2.9-mile Detroit People Mover, which shut down for two years during the pandemic, resumed limited service on Friday. Rides, normally 75 cents, are free for 90 days.

In what's called a "soft opening," the autonated monorail stops at six of 13 stations. Stops will be added in coming weeks, according to a press release.

Here's the station hours for now: