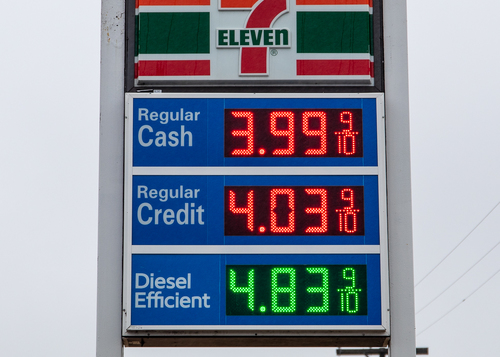 Here's some fuel for thought: About a fifth of what you pay at the pump is tax.

Michigan's gas taxes and fees reached a new high of 64 cents in January as the portion used to help fund road repairs climbed under a Snyder-era law. Reportedly, Michigan's is the sixth-highest gas tax in the nation.

Michiganders can expect to see its gas tax go up every year because of the way the law is written. Starting in 2022, the law mandates the state gas tax to increase every Jan. 1 by either 5% or by the state’s inflation metric – the lesser of the two.

California drivers had the highest gas tax in January, paying 77.2 cents per gallon in state and federal taxes, according to the U.S. Energy Information Administration. The other states paying more tax at the pump than Michigan: Pennsylvania, Illinois, Washington and Indiana.

Gov. Gretchen Whitmer on Tuesday joined a cohort of state leaders seeking a suspension of the federal gas tax, which would save drivers 18 cents per gallon.

In 2019, she sought to raise the tax by 45 cents in an effort to make good on a campaign promise to "fix the damn roads," but was rebuffed by Republican legislators.